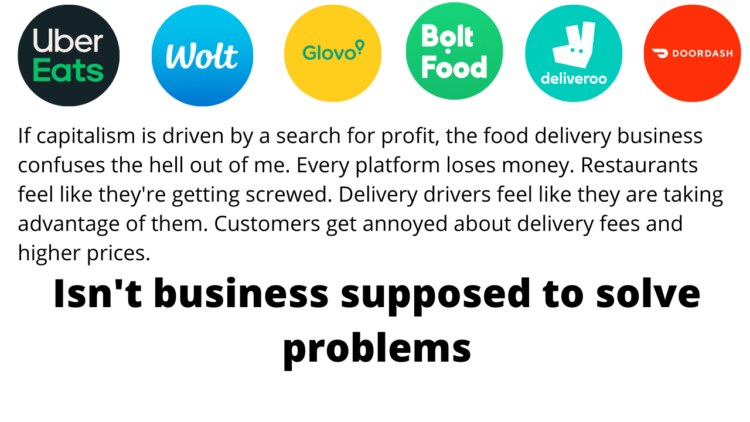 Why is the state of food delivery startups so fucked up? The only innovation today from food delivery companies is how much capital they have raised. You have insanely large pools of capital creating an incredibly inefficient money-losing business model. It’s used to subsidize an untenable customer expectation. You leverage a broken workforce to minimize your genuine labour expenses. The companies unload their capital cannons on customer acquisition.

You are capturing restaurant data of the top-selling dishes and now creating your own ghost kitchen producing and selling these dishes to customers at lower prices directly competing with the very restaurant you claim to service and help. Charging up to 45% of the commission to local restaurants when you know very well that restaurant profit margin only ranges between 5 – 15%. How do you expect these local restaurants operated by these lovely passionate people to survive not to talk or even thrive? How will they support their families, employees and create jobs in the economy?

Which brings us to the question – what is the point of all this? These platforms are all losing money. Just think of all the meetings and lines of code and phone calls to make all of these nefarious things happen which just continue to bleed money. Why go through all this trouble?

Doordash reportedly lost an insane $450 million off $900 million in revenue in 2019. Uber Eats is Uber’s “most profitable division” 😂😂. Uber Eats lost $461 million in Q4 2019 off of revenue of $734 million. Sometimes I need to write this out to remind myself. Uber Eats spent $1.2 billion to make $734 million. In one quarter. Amazon just bailed on restaurant delivery in the U.S. What is it about the food delivery platform business? Restaurants are hurt. The primary labour is treated poorly. And the businesses themselves are terrible. As this conflict comes to a boil, one thing is becoming clear: there are no winners in this fight. Restaurant owners are losing money. Diners are seeing their costs raised, either by delivery companies that need to pay delivery drivers or by the restaurant owners who raise prices to offset delivery fees. And delivery drivers still make low, unpredictable wages frequently with no benefits.

The space of Food delivery (or food-tech, as the entrepreneurs describe) — at one time — managed to make the investors salivate at a rate that would have put the world’s best pizza to shame. Now? Not so much. Why? What was so great about them? And if it was, then all of a sudden what changed?

Did the restaurants not need the delivery support infrastructure anymore? That seems unlikely. It’s not like the concept of ‘home delivery’ is new. The local eateries have been doing it for the longest — even before your local grocer or medical store started delivering your orders to your doorsteps.

Neither the VCs, nor the entrepreneurs were wrong in seeing value in food-tech. It is a space where there is a lot of potentials, highly disorganised, exceptional repeat rates (hello dear bachelors), quite localised and customised. It has everything that makes any business drool at the prospect of success. And yet, somehow it is not working out so well for these guys. Why?

How did we get to a place where billions of dollars are exchanged in millions of business transactions but there are no winners? But I don’t think that’s sufficient here. Delivery can work. Just look at a Domino’s stock chart. But, the delivery has been carefully built as part of a holistic business model and infrastructure. Maybe that’s the viable model.

Third-party delivery platforms, as they’ve been built, just seem like the wrong model, but instead of testing, failing, and evolving, they’ve been subsidized into market dominance. Maybe the right model is a wholly-owned supply chain like Domino’s. Maybe it’s some ghost kitchen/delivery platform hybrid. Maybe it’s just small networks of restaurants with out-of-the-box software. Whatever it is, we’ve been delayed in finding out thanks to this bizarrely bankrolled competition that sometimes feels like financial engineering. The more I learn about food delivery platforms, as they exist today, I wonder if we’ve managed to watch an entire industry evolve artificially and incorrectly. Arbitrage is about taking advantage of market inefficiencies and for all the newly minted day-traders out there